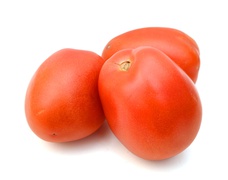 A slightly elongated, middle-sized variety. One popular and flavorful variety from Italy has a pointed shape and is known as San Marzano.

In plum tomatoes – if they are ripe – you will find more sweetness than acidity.

The size varies and there are yellow varieties.

How to cook plum tomatoes

You can have them in salads and raw on the plate, but plum tomatoes, due to the thick skin, the mushy interior, deep flavor and lower seed count, are the classical tomato for sauces.

Cook your tomato sauce from scratch. One method is to fry the whole tomatoes in a deep frying pan on moderate heat. After a while the tomatoes will burst and the tasty juices will escape. At the same time the peel will start coming loose and you can remove it with your fingers or with tweezers. (If you should have troubles doing this, another trick is to – a little later – use a whisk to catch any remnants of peel in the sauce.) let the sauce simmer gently for a long time and reinforce the flavors with salt and, a little sugar (if necessary), newly ground black pepper, a sardelle or two, oregano, etc.

Plum tomatoes do beautifully in any kind of casserole or stew. Putting them in whole maximizes flavors – and you can remove the peels later using a whisk as described above.

Fill the tomatoes with almost any seasoning at all and bake them in the oven. Almost any choice of seasoning from around the Mediterranean will do.

Make sun dried tomatoes (which in practice means drying them in an oven at low heat for a long time). Plum tomatoes are easily the best raw material for this method.