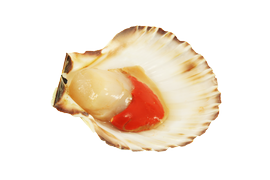 The shell of this type of mussel is the symbol of St James, or Santiago as he is called in Spanish. It is used as a signpost along the walking trail that leads to his relics in Santiago de Compostela. This is why some languages call these “pilgrim mussels”.

Scallops are bivalves, a kind of mollusk.

Extremely white, often frozen, scallops may have been chemically treated to look appetizing. There’s a risk that these will release so much liquid that it’s hard to brown them in the frying pan. One trick is to soak them in water first – and dry thoroughly before searing in a pan.

How to cook scallops

If possible, buy fresh scallops with the shell on so you can get an idea of their quality.

If the hard ligament – or "foot" – is still attached to the round, edible muscle, it should be removed.

Make sure to dry the scallop thoroughly before frying or you risk getting a cooked/steamed result rather than fried. The surface should be seared, and the interior still soft and smooth. The heat should be high and the cooking time short.

One technique is to use oil first when applying high heat, and to add butter later for flavor. Baste if possible.

After frying, the scallop should be speckled brown and the center juicy (medium rare) and look like mother of pearl. It’s best to use a digital thermometer with a thin probe and aim for 45°C.

One trick to get a crisper surface is to use a thin layer of breadcrumbs.

Scallops can also be topped with cheese and gratinated and served in the shell. They should be raw when cooking starts, unlike cheese-topped blue mussels.