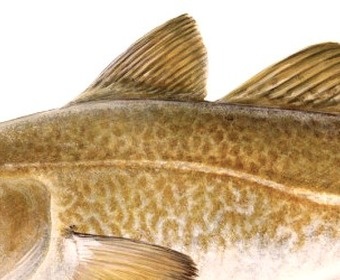 Gently boiled or fried chunky fillet of cod with melted butter, green peas and boiled potatoes. Sometimes an amazing dish doesn't have to get any more complicated than that. Simplicity ("don't complicate things with fish") is definately to be advised when dealing with this raw material, but there are still one or two things you should know:

A 150 gram chunk should be about right per person. It might not sound like much, but a bigger serving – some recipes say 200 grams – can be experienced as too much of a good thing.

To boost the flavor and to make the meat meatier – especially when frying or even grilling – place the chunky fillet in a 10 percent brine solution (figure it out from 1 dl of salt in 1 L of water...) for about 30 minutes. Dry before cooking.

Boiling or steaming is also a good way to cook a chunky fillet of cod. Don't forget to carefully let the fillet "land" on kitchen paper or a kitchen towel before plating. Otherwise you will end up with hot water spilling around on the plate, diluting the melted butter and messing up your composition.

How to cook chunky fillet of cod