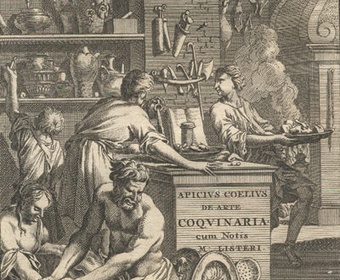 The world’s oldest surfing cookbook dates back to the 9th century. Called De Re Coquinaria (The Art of Cooking), many believe the recipes collected by author Marcus Gavius Apicius date back to the 4th or 5th century AD.

The 500 recipes are divided into ten books that deal with careful housekeeping, handling meat, bird and fish and using vegetables. A downside for any novice is that the recipes do not provide quantities of anything, so preparation is a bit hit and miss, but an adventure for any foodie.

Probably the Gordon Ramsey of his time, Apicius was a gourmand who enjoyed delicacies like flamingo tongue. Dubbed by some as the ‘most gluttonous grover of all’.

Apicius was a huge lover of garum fish sauce, famed for being salty and aromatic. Often made from mackerel, the Roman gourmand used the sauce in almost all his dishes. A modern version involves cooking a quart of grape juice, reducing it to one-tenth its original volume, adding two tablespoons of anchovy paste in the concentrated juice and mixing in a pinch of oregano.

Everything you wanted to know about bitterness Apr 15, 2021

Everything you wanted to know about bitterness Apr 15, 2021