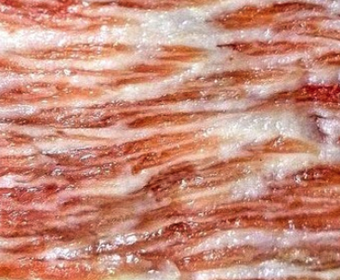 The spanish original "Secreto Iberico" translates, not surprisingly, as "Iberian Secret". But this exclusive cut from the world's tastiest breed of pig is becoming the talk of the town...

Secreto Iberico is a cut of meat from the side of the pigs powerful neck, close to the shoulder. It is highly marbled (see picture!), juicy, and tasty – just the thing for a quick sear over hot coals.

"Iberico" is the name of Spains famously tasty breed of black pigs that are used to make the world's best cured ham, but the "secret" is also tasty when coming from any other breed of pig. Read all about it: