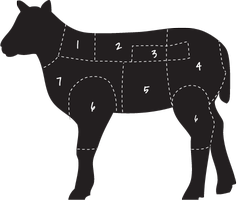 Lambs were the first animals to be domesticated in Mesopotamia about 9000 years ago. Our ancestors clearly had good taste.

The fine meat of lamb should be light pink in color. The redder it is, the older the animal – sheep’s’ meat is burgundy color. The meat should be firm and the fat should be creamy white, not yellow.

For lamb, age, season and pasture has a greater impact than breed. A lamb is normally between 3 to 12 months old and the average slaughter weight is only around 18 kilos.

Suckling lambs are slaughtered at an age of only two to three months old. The meat is light in color and mild.

Autumn lambs are allowed to grow to five to seven months old and are slaughtered during the autumn. They have grazed throughout the summer and have often built more fat and taste than spring lambs.

Spring lambs are born during the winter. They are slaughtered at around four to five months old and they have a mild lamb taste.

Winter lambs often graze outdoors and are fed indoors during the winter. They are allowed to reach an age of one year and have a leaner, more mature meat than younger lamb.

Some of the most common are Dorset, Suffolk, Texel and fine wool sheep. Merino is also common in Australia and New Zealand.

Lamb meat should not hang or tenderize like beef. It should be eaten fresh, preferably within a week after slaughtering. Be careful with the hygiene and the chilling chain when you handle lamb. You can hamper the oxidation process by rubbing the pieces of meat with olive oil and make them last a bit longer.

To season or not to season

Doctrines about lamb differ. The meat is light and very soft and many chefs think that it should be seasoned with care. At the same time, the meat works well with a wide range of strong seasonings and there are many traditional lamb dishes in many countries, especially those around the Mediterranean, North Africa, Middle East and Asia where spices are used generously.

Cuts vary from country and regions, with countries like New Zealand, Canada, UK and Australia proving nine different variations compared to eight differentiations in the US and Ireland.

Around the year, all year

In the old days, all lambs were slaughtered in the autumn when the pastures were finished. These days it is possible to find fresh lamb all year around. It is common that one crosses breeds to achieve a good balance between lambing, meat production, temperament and (possibly) wool production.

Lamb meat in New Zealand is produced with a high and steady quality. The problem is that lamb meat is a fresh commodity and the country is situated on the other side of the globe from countries in Europe.

Discover yourself whether the goods have been frozen or not. If you buy frozen lamb, thaw slowly. Meat that has been frozen does not give as good result if you fry it, but works well to boil.